In 1937 Marvin (Marv) Jenson purchased three acres of ground at 8400 S. on Redwood Road. He and his wife Margaret hoped to develop the property into a fur breeding ranch. Marv also thought he should try his hand at training boxers. He had recently won the 1937 amateur intermountain boxing championship and his older brother Pete was already boxing professionally.

From this inconspicuous beginning proceeded an era of dedication, commitment and innovation marked by success in practically every endeavor Marv entered into. As they say in newspapers ..."The rest is history." The history of a man who's talents, foresight, business sense and love for young people knew no bounds.

Marv Jenson's' mink ranch was one of the most successful in the United States and perhaps in the world. His efforts at raising quality mink consistently won him International recognition. Some of the mink he raised set standards for quality and sold for prices which were considered world records. He at one time sold a single female "Blue Sapphire" for $3,000.00. And one of Marv's males sold for $6,000.00. Those were prices that were unheard of in the mink business until Marv Jenson came along. He raised mink on the property until about 1988 when he retired from the business.

Marv was also extremely successful as a boxing manager and fight promoter. Marv managed many prestigious fighters of the day.  He managed Gene Fullmer who became the Middleweight Champion of the world. He also managed many other fighters such as Rex Lane who beat several world champions, Jay Lambert who was an Olympic champion at the games in London, England in 1948 and Lamar Clark who won 45 fights by knockouts.

But the part of boxing that Marv took the most pride in are the countless young people that he was able to work with over the years. Following his retirement at the age of 70 he continued to look forward to working with and being a positive influence, in the lives of young people.

For years the gymnasium which was like home to so many boxers, also doubled as a dance floor. The dance club was organized and sponsored by Marv Jenson. The boxing ring was constructed in such a way that it could be raised to the ceiling. On Friday nights the floor was covered with spit shined shoes rather than spit buckets. Young ladies wore nice dresses and the young men traded in their boxing trunks and head gear for sports coats and ties. Marv and Ray Ulibarri, a local disc jockey, provided the entertainment for as many as 300 local teens each week for several years. Any teenager was invited to attend providing they abided by the dance club rules of no drinking, smoking or swearing, boys needed to wear sports coats and ties and girls needed to wear nice dresses. Membership fees were $1.00 per year. Needless to say, lots of young people learned to dance at Marv Jenson's, either on the dance floor or in the boxing ring.

In the mid 1970's Marv decided to sell half of his three acres to the Jordan School District. Marv had served on the School Board for 9 years (1952-1960). He served as the School Board President for two of those years.

Marv felt that his property might better be used for a Special Education facility. Initially the program was called South Valley Enterprises and served adult individuals with special needs. Today the program is South Valley School and it serves Middle school, High School and post High school students with various disabilities.

When he originally sold the property to Jordan District, Marv maintained a close working relationship with the administrators and staff of the school. In the year 2000, Marv sold the other one and a half acres of his property to the Jordan School District for the expansion of South Valley School's program.  He died on March 14, 2007, leaving behind a legacy that has benefited many students and will continue to bless the lives of others for many years to come.

As students and staff at South Valley School returned to a new school building in the fall of 2003, they became part of a realized dream that began sixty years earlier for Marv and Margaret Jenson.

Marv was born and raised in West Jordan. As a boy he worked on his fathers farm and a neighboring mink ranch. After graduating from Jordan High School in 1935, he began boxing professionally. After 14 professional fights in the late 1930's, all won by knockouts, Marv contracted Rocky Mountain spotted fever and was forced to retire as a boxer.

He married Margaret on Nov. 20, 1937 and together they built their home at 8400 S. Redwood Road and began raising mink. Marv was one of the first breeders of the sapphire mink and was recognized as an expert in mink genetics. During the 50 years he was involved in the mink breeding business, he served as director of the Fur Breeders Agriculture Co-op and won numerous awards for his high quality mink.

Marv's great interest in youth began in 1940 when he started teaching young men boxing skills in his basement gym. In 1958, Marv built a large gymnasium next to his home, complete with boxing ring, a basketball court, shower rooms, sleeping quarters and a restaurant. The gym not only became one of the major boxing training centers in Utah, but by raising the boxing ring to the ceiling, it was used as a basketball court, movie theater and neighborhood dance spot for teenagers.

In 1974 the Jenson's sold their gym to Jordan School District to be used as a sheltered workshop for adults with disabilities. Over the next 30 years it would turn into what is now a Special Education post High School program for approximately 150 full-time and another 50 part -time students who receive vocational training in the school's wood shop and greenhouse.

Marv worked as a gym teacher at Jordan High School, served as a Board Member and President of the Jordan School District Board of Education, was a Board Member and Mayor of West Jordan, a Board Member of the Salt Lake County Recreation Board, a Salt Lake County Commissioner, a Board Member of the Salt Lake County Planning Board, Salt Palace Board Member, Assistant Director of Utah State Division of Parks and Recreation, and served on the Governors Advisory Council on Physical Fitness. In 1960, Marv received the prestigious James J. Walker Award for "meritorious service to boxing" during a ceremony in New York City. In 1986 then Governor Norm Bangerter declared July 15, 1986 "Marv Jenson Day" in the State of Utah. In 1991, Marv was named "West Jordan Citizen of the Year," for life long devotion to youth athletics and the City of West Jordan.

Marv was quick to say that the could not have accomplished all that he did without the support of his family, especially his loving wife Margaret.

Marv and Margaret's dream to serve the youth and this community will live on in the halls of South Valley School for many years to come.

The world lost Marv on March 14, 2007.  We here at South Valley will always be grateful for his generous contributions and life of dedication.

Memorabilia from his life has a prominent place in the main hall history case here at South Valley School.  We revere his memory and will always be grateful to his generous contributions. 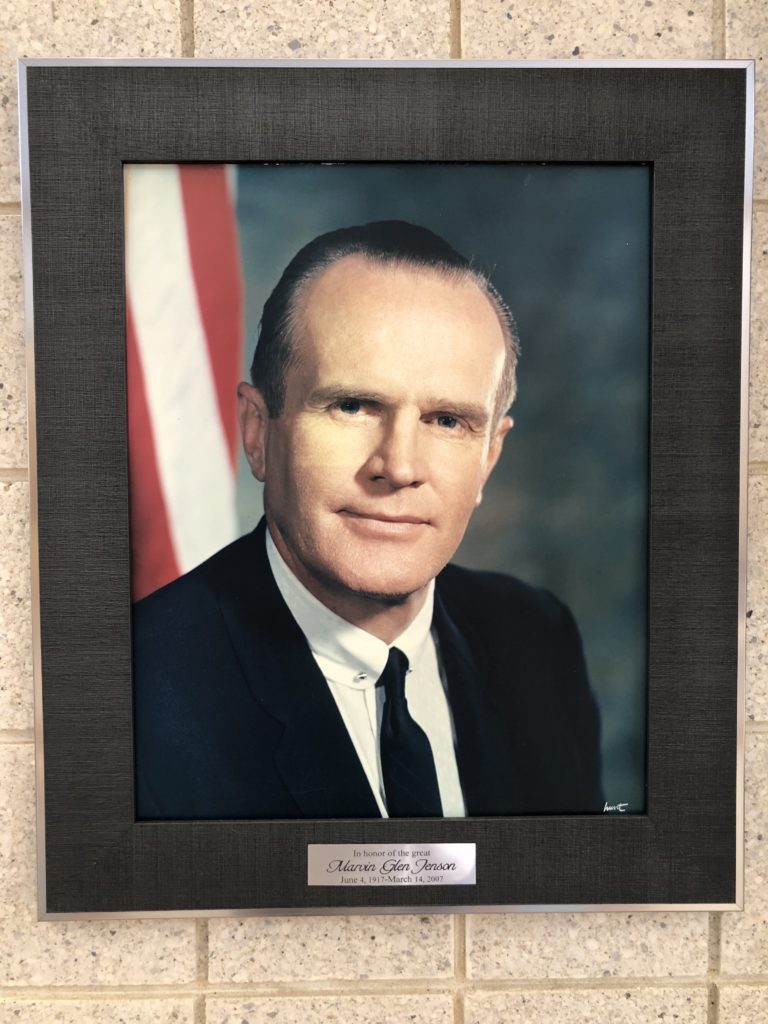 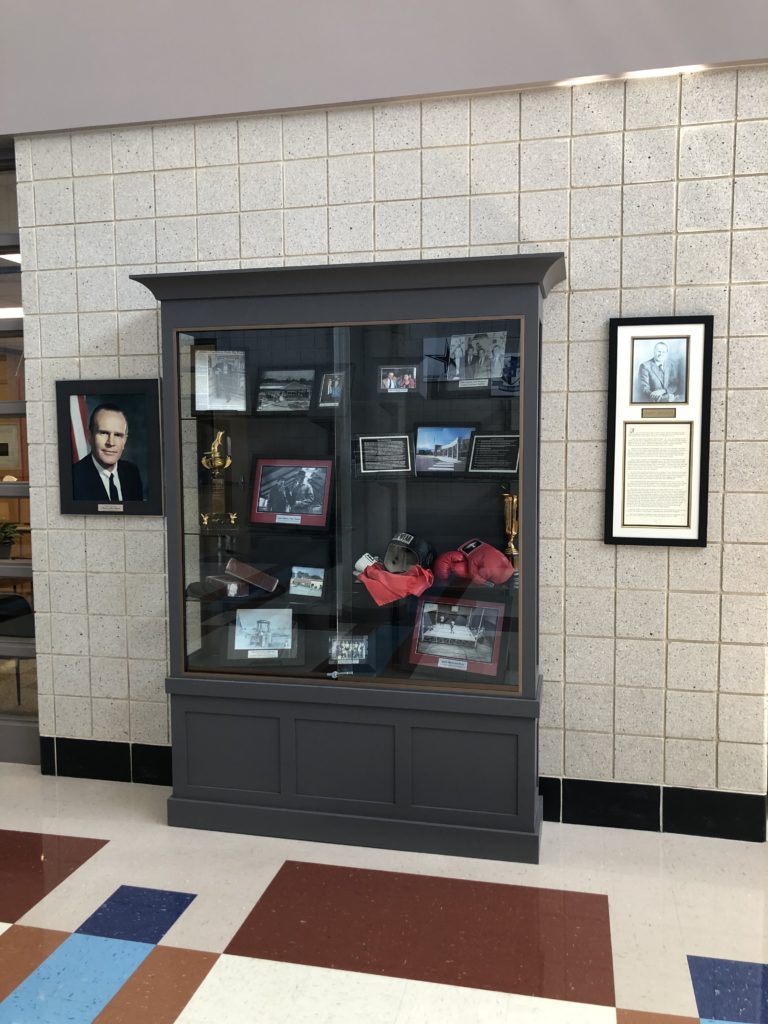